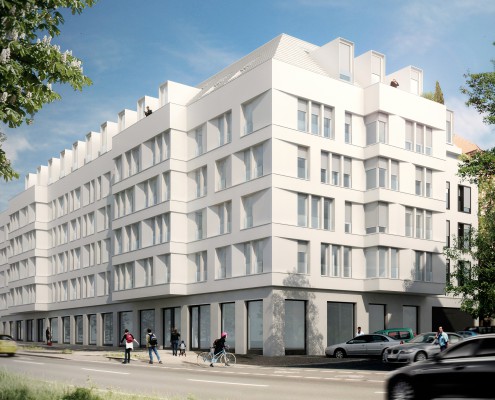 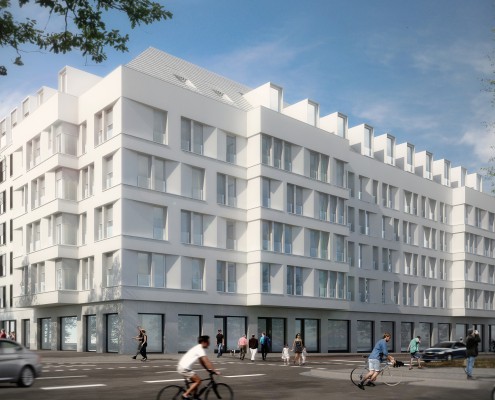 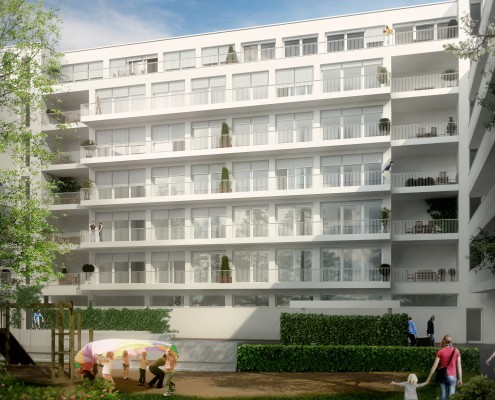 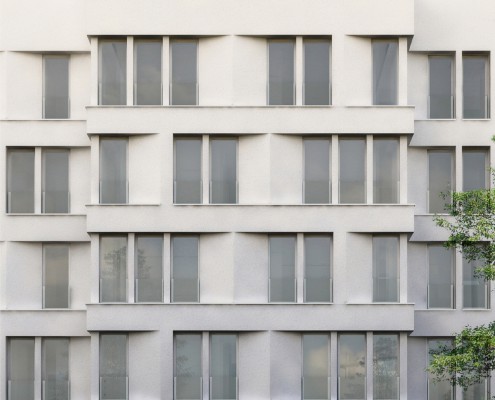 Urban development I The block surrounded by the Lößniger Straße, the Altenburger Straße and Kurt-Eisner-Straße, builds a start and forerunner of future urban life on the premises of the Bayerischer Bahnhof.

The quarter is characterized by its homogeneous environment – in the nearer and also distant surroundings. It creates a place of continuity and at the same time defines itself as centre of specific qualities between the Media City, Bayrischer Bahnhof and Art Nouveau residential area. Thus, an own characteristic attractiveness for users of different target groups is built up.

Consequently the interpretation of the place on the one hand and the design schedule as guideline on the other hand establish the principles for a building configuration, which features a specific flexibility in the inside.

The building uses the maximally possible horizontal and vertical extension, integrates into the street as another component in an inconspicuous and self-confident manner and regards itself as large-scale volume.  It becomes part of an urban boulevard, which encounters the open space of the Bayrischer Bahnhof, that still is to be designed towards the east and thus represents its current conclusion.

Volume I Due to the noise pollution of the Kurt-Eisner-Straße and the high density which is     to be achieved the forward projection of the block perimeter development is an architectural answer for this place. The building finds its final character within the “structuring“ in manageable sections – with docking sites to the existing buildings in the Lößniger Straße and Altenburger Straße. A volume is being developed that adapts with regard to the construction depth of the environment and finds an upper conclusion full of tension in combination with the attic floors.  To the Kurt-Eisner-Straße, along the road, there are two of the three development cores, which allow the interior court a connection to the superior free space character of the quarter.

One part of the court is occupied by utilizations at different levels. Thus, the court is divided into zones with various densities and differentiates between public, semi-public and private.

Distribution of utilization I The large connected service spaces are located on the ground floor along the Kurt-Eisner-Straße. Another unit which can be used in a multifunctional way is located, perhaps also distributed on two storeys, in the eastern part, at the Altenburger Straße. Thus, the service units possess their own entry and also their address, at the Kurt-Eisner-Straße.

The remaining volume is used for residential purposes and is vertically distributed into five full and one stacked storeys.

Service I The offer of store spaces is arranged on the ground floor zone and has a delivery zone in the courtyard. Depending on the utilization strategy the offer can be complemented by additional service areas on the first floor.

Living I Living is based on four various conceptual approaches, which directly depend on the existing requirements with regard to noise, neighbourhood and orientation.

“Situational reacting“ to this circumstance has its impact in form of changing flat depths and specific types of floor plan. There is basically the intention to facilitate access to the courtyard to as many inhabitants as possible and corresponding to the situation to offer attractive outside spaces. In order to optimize the building depth and to use the dark zone, flat typologies are developed, which are determined by flowing rooms. Four typologies are further developed from this:

“Established alternative“ reference to the neighbourhood, to the courtyard, lockable rooms.